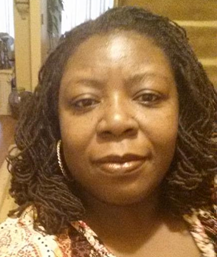 Jacqueline Luqman is a long-time social and racial justice activist. Her interest in government process and policy began high school in the 80s in the Close-Up program. Her work as a receptionist for a lobbying firm after graduating further piqued her interest in politics, stemming from her exposure to the real inner-workings of influencing legislation for special interest groups. Her interest turned from pursuing work in politics to grassroots political and community activism, becoming involved in protests in support of ACT UP, AIDS research, and gay rights; with Trans-Africa in the effort to end Apartheid in South Africa; for peace for Central America & Southern Africa; against the Gulf War; for Immigrants’ Rights’; for D.C. Statehood; against the Iraq War and all global U.S. military intervention since. Jacqueline has also been involved in community and local efforts, supporting community cleanups, neighborhood watches, clothing and food and school supply distributions, community policing/liaison, and local government community advocacy for more than 15 years. Jacqueline has a deep passion for racial justice, which is fueled by her own family’s experiences, as well as her love the history of Black people in the context of social struggle in America. She is passionate about learning and helping others learn the history of the struggle for racial justice in America, and giving voice to Black political and social thought in the expanding Progressive political space . She and her husband Abdusshahid currently host shows on two online outlets (Facebook and YouTube): Coffee, Current Events & Politics, which focuses on politics and current events from a Black perspective; and Brick by Brick in Luqman Nation, which focuses on the history that led to many of the issues we face today. Jacqueline is also active with the Board of Social Action of Plymouth United Church of Christ, focusing on applying faith principles to social and racial justice efforts in the continuing fight for gay, immigrant, Black, worker, and human rights.