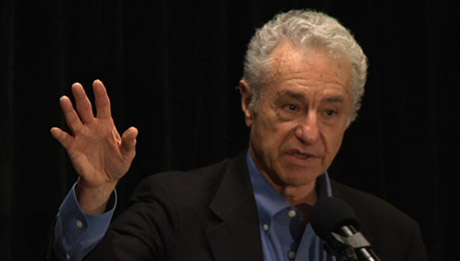 Gar Alperovitz has had a distinguished career as a historian, political economist, activist, writer, and government official. For fifteen years, he served as the Lionel R. Bauman Professor of Political Economy at the University of Maryland, and is a former Fellow of Kings College, Cambridge University; Harvard’s Institute of Politics; the Institute for Policy Studies; and a Guest Scholar at the Brookings Institution.

He is the author of critically acclaimed books on the atomic bomb and atomic diplomacy and his articles have appeared in the New York Times, the Washington Post, The Los Angeles Times, the New Republic, The Nation, and the Atlantic among other popular and academic publications.  He has been profiled by the New York Times, the Associated Press, People, UPI and Mother Jones and has been a guest on numerous network TV and cable news programs, including “Meet the Press,” “Larry King Live,” “The Charlie Rose Show,” “Cross Fire,” and “the O’Reilly Factor.”

In addition to his media appearances, his work has been featured in TV documentaries, including two BBC programs and an ABC Peter Jennings Special on the use of the atomic bomb. As a well known policy expert, he has testified before numerous Congressional committees and lectures widely around the country.

Among his many achievements is having been the architect of the first modern steel industry attempt at worker ownership in Youngstown, Ohio.  In addition, he was nominated to be a member of the Council of Economic Advisers by leading national consumer, labor, and environmental organizations.

He is also the president of the National Center for Economic and Security Alternatives and is a co-founder of the Democracy Collaborative, a research institution developing practical, policy-focused, and systematic paths towards ecologically sustainable, community-oriented change and the democratization of wealth. He is also the co-chair of the Next System Project, a project of the Democracy Collaborative.

He lives in Washington, DC.